Glenn Sartori has written electrical engineering textbooks for the college and trade school markets.  He lives in St. Louis with his wife, Rosanne.  Epiphany is his first novel. 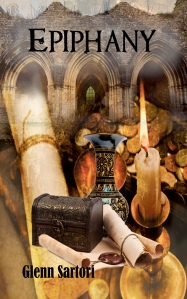 In medieval Russia, a battlefield historian is commissioned to transport treasures from the invasion-torn south to a haven in the north. Centuries later, four events occur simultaneously. Grace Sawyer, on her summer sabbatical at the Rosanov Art Institute in Yaroslavl, stumbles upon a

, an art historian in New York, is solicited by a friend in the CIA to journey to Yaroslavl on a cryptic

quest. In Kiev, the brother of the president of the Ukraine is assassinated, and a group of men plan to violently end the Epiphany–the historic meeting between the Pope and the Patriarch of Russia. Within a week, these events will mesh in a violent climax that echoes in the halls of the Rosanov Art Institute.